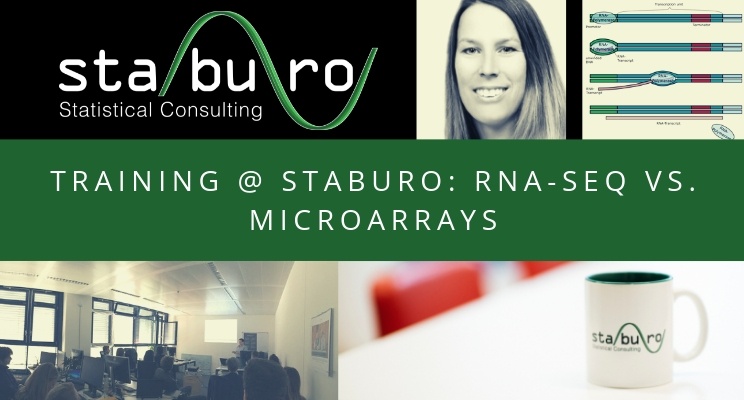 Training @ Staburo: How to measure the abundance of mRNA, using Microarrays and Sequencing Technologies

The normal function of cells depends on accurate expression of a large number of proteins. As it is difficult to measure the number of thousands of proteins simultaneously, a pre-state of them – the so called protein coding RNAs (messenger RNAs; mRNAs) – are normally measured.
Staburo GmbH Bioinformatician Dr. Janine Roy started this talk with an introductory overview of protein synthesis, to answer the question – How is the information coded in the DNA translated to functioning proteins? Therefore, the structure of a cell with its organelles, Translation from DNA to pre-mRNA, splicing as well as the genetic code was profoundly explained.
Afterwards she moved to (DNA-)Microarrays and RNA-Sequencing.
Microarrays are used to measure the expression levels of large numbers of genes simultaneously. The composition of a Microarray and the general workflow of an experiment was shown on an example.
RNA-Sequencing uses next-generation sequencing techniques to reveal the presence and quantity of RNA. As many sequencing techniques exists, the technique of Sequencing by Synthesis was explained exemplary on a more detailed level.
The talk finished with a rigorous comparison of (dis-) advantages of (DNA-)Microarrays and RNA-Sequencing.